First the Gays, now the Jews? 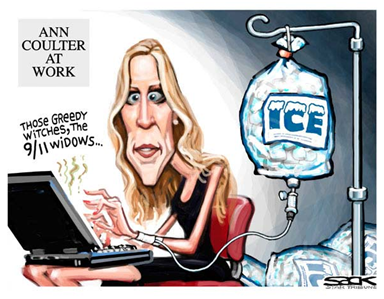 WASHINGTON (CNN) – Conservative commentator and best-selling author Ann Coulter may find herself in the midst of a controversy for comments Monday suggesting America would be better if everyone was Christian.

When CNBC host Donny Deutsch responded, “It would be better if we were all Christian?” Coulter said “Yeah.”

Deutsch, himself Jewish, continued to press Coulter on her remarks, asking, “We should just throw Judaism away and we should all be Christians then?”

Later in the interview Deutsch asked Coulter if she doesn’t want any Jews in the world, Coulter responded, “No, we think — we just want Jews to be perfected, as they say.”

“Wow, you didn’t really say that, did you,” Deutsch said. Deutsch said he was personally offended. Deutsch continued to call Coulter’s comments anti-semetic.

Sometimes being controversial just to be controversial blows up in your face. Earlier this year she drew fierce criticism from both sides of the aisle after calling Edwards a faggot. Now she is in hot water over these anti-semetic remarks. But the funny thing is I don’t believe she has any problems with gays or with Jews, she is just really really needy.

I’m what I’d like to call a rough around the edges Christian, I believe somethings and I don’t believe others.  I have my balance between faith and doubt.  I don’t ascribe to all of the church’s rules, it would be hard to without hating myself.  Some would say that makes me a supermarket Christian (I pick and choose what to buy), but I think it makes me realistic.  Whether God or evolution, I had no say in being gay and as such I don’t expect to be punished for it.  And while I am in no way a good representative of Christians in general, I do think I can speak for a lot of Christians and say I don’t view Christians as “Perfected Jews”.  I don’t view any people as perfected anythings.

This entry was posted on Friday, October 12th, 2007 at 12:09 am and is filed under ann coulter, bat shit crazy, christian, christianity, conservatives, culture, democrats, discrimination, family, gay, gblt, jew, jewish, lesbian, life, media, musings, opinions, random, religion, republicains, society, thoughts, tool bag of the day, women, writing. You can follow any responses to this entry through the RSS 2.0 feed. You can leave a response, or trackback from your own site.

One Response to First the Gays, now the Jews?