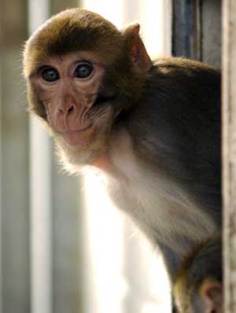 You are probably not going to believe this story, so here is the link.  A senior government official in India was attacked by a gang of monkeys and died yesterday.  The story goes, New Delhi Deputy Mayor S.S. Bajwa was attacked by a group of wild monkeys and as a result fell from a balcony at his home.  He died of his head injuries.  Apparently the monkeys hang out at all of the big homes, temples, and official buildings and are a major problem.

“New Delhi Deputy Mayor S.S. Bajwa was rushed to a hospital after the attack by a gang of Rhesus macaques, but succumbed to head injuries sustained in his fall, the Press Trust of India news agency and The Times of India reported.”

This entry was posted on Monday, October 22nd, 2007 at 8:44 am and is filed under animals, global, india, indian, news, odd news, politics, world. You can follow any responses to this entry through the RSS 2.0 feed. You can leave a response, or trackback from your own site.