Something Else Bad about Vista 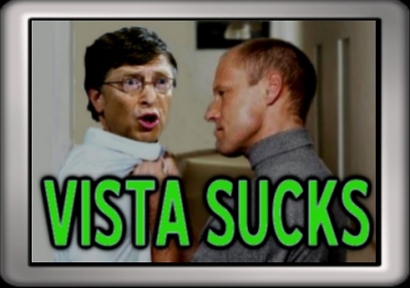 Vista has been plagued with problems since the start, and today I am reporting on another one.

Although the update — actually a pair of prerequisite files that modify Vista’s install components — has been temporarily pulled from Windows Update, Microsoft has not yet produced a fix for users whose machines either won’t boot or reboot constantly.

Shortly after the two prerequisites hit Windows Update last week, users began reporting problems on Microsoft’s support newsgroups. Most said that the update hung as the message “Configuring Updates Step 3 of 3 — 0% Complete” appeared on the screen. When users rebooted hoping to clear the error, their PCs went into an endless cycle of reboots. A smaller number of users said that their computers refused to boot normally.

Some users have been able to regain control by booting from a Vista install DVD and selecting the “Restore from a previous restore point” option.

But do you know who doesn’t have to worry about this problem?  (In addition to the Mac fans)   Me.  Thats right.  I upgraded to “a more familiar model”: XP.  I’m sorry Vista, I gave you 6 months.  No printer compatibility, slow processing, and limited USB function.  The deal breaker was every time a window’s update installed or I restarted my computer my mouse stopped working and I had to system restore.

This entry was posted on Wednesday, February 20th, 2008 at 8:01 am and is filed under computers, mac, news, tech, technology, vista, windows, xp. You can follow any responses to this entry through the RSS 2.0 feed. You can leave a response, or trackback from your own site.