Ever wonder what your appendix is up to? 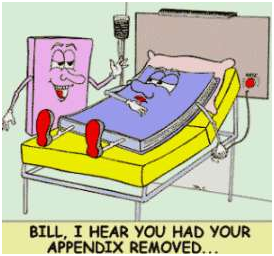 Scientists have finally solved an age old medical mystery (or likely solved). The appendix, often viewed as an evolutionary relic, has a function (at least theoretically). Bad news for my readers who have had them removed and are now planning on moving to an uninhabited island living along for the rest of their lives. Here’s the explanation.

WASHINGTON (AP) — Some scientists think they have figured out the real job of the troublesome and seemingly useless appendix: It produces and protects good germs for your gut. That’s the theory from surgeons and immunologists at Duke University Medical School, published online in a scientific journal this week.

The function of the appendix seems related to the massive amount of bacteria populating the human digestive system, according to the study in the Journal of Theoretical Biology. There are more bacteria than human cells in the typical body. Most are good and help digest food. But sometimes the flora of bacteria in the intestines die or are purged. Diseases such as cholera or amoebic dysentery would clear the gut of useful bacteria. The appendix’s job is to reboot the digestive system in that case. The appendix “acts as a good safe house for bacteria,” said Duke surgery professor Bill Parker. Also, the worm-shaped organ outgrowth acts like a bacteria factory, cultivating the good germs, Parker said. That use is not needed in a modern industrialized society, Parker said.

If a person’s gut flora dies, it can usually be repopulated easily with germs they pick up from other people, he said. But before dense populations in modern times and during epidemics of cholera that affected a whole region, it wasn’t as easy to grow back that bacteria and the appendix came in handy. In less developed countries, where the appendix may be still useful, the rate of appendicitis is lower than in the U.S., other studies have shown, Parker said. Even though the appendix seems to have a function, people should still have them removed when they are inflamed because it could turn deadly, Parker said. About 300 to 400 Americans die of appendicitis each year, according to the CDC.