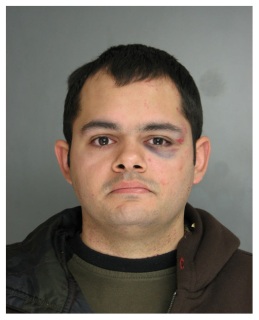 I thought I was politically motivated:

FEBRUARY 25–Meet Jose Antonio Ortiz. The Pennsylvania man allegedly stabbed his brother-in-law in the stomach after the pair quarreled about their respective support of Democratic presidential candidates Barack Obama and Hillary Clinton. According to cops, Ortiz, 28, stabbed Sean Shurelds last Thursday night in the kitchen of an Upper Providence Township home. According to a criminal complaint, a copy of which you’ll find here, the 41-year-old Shurelds, an Obama supporter, told Ortiz that the Illinois senator was “trashing” Clinton (apparently in regard to recent primary and caucus results). Ortiz, a Clinton supporter, replied that “Obama was not a realist.” While not exactly fighting words, the verbal political tiff led to some mutual choking and punching. And, allegedly, a stabbing in the abdomen. Shurelds was flown to Hahnemann University Hospital, where he was admitted in critical condition. (2 pages) Source

While violence is never a good thing, and the two men involved in the story were probably not the brightest, it is refreshing to see people care.  Pennsylvania rarely gets to make a difference in the primary season and I hope people don’t waste their opportunity.  Obviously I hope everyone gets out and votes for the most qualified candidate (Hint: Hillary Clinton).   But even if you are voting for another candidate, or worse yet, another party, take advantages of this opportunity.  Research the candidates stances and histories, evaluate what is important to you, and vote!

PS.  Politics are great but stabbing someone isn’t the answer.  I know it can be frustrating when a friend or relative admits to supporting Obama in spite of his lack of experience, already broken promises, and his inability to provide details about any of the “change” he plans to bring.

What comes to mind when I think of Barrack Obama? A candidate of nothing. An interesting man, a talented orator, a devoted father/husband, and a political novice. A shell of a president. A man with a brilliant future, several years from now, when he has the experience to command anything more than an audience. His own supporters have been stumbling in interviews when simply asked to state one legislative accomplishment. Why then is he winning? Two words: incandescent speech. When the man talks, he glows. He beams of confidence, optimism, and truth. In reality those beams consist of arrogance, naivety, and rhetoric. I appreciate a good public speaker and do value words. I would never lobby his lofty speech against him like some people have. Now his lack of experience is another issue that I have no problem holding against him.

So what is my point? You already know I support Clinton, but respect Obama (that does not mean I have to respect people who vote for him). Words are really all he has and now the news is reporting some of his words are not his own. Yes, I speak of plagiarism, a borderline curse word in the academic setting. Apparently plagiarism is completely acceptable in the campaign for the White House. Because he continued his surge of victories after the story broke. A man running solely on his words shouldn’t be simply quoting others. Many of you will jump to his defense, that is was his speech writers who plagiarized, but therein lies the problem. If words are all he has and we don’t hold him responsible for his words then there is nothing left of his candidacy.

In defense of being “just words”

Obama responded nearly word for word and without attribution, a quote from Massachusetts Gov. Deval Patrick. “Don’t tell me words don’t matter. ‘I have a dream’ — just words. ‘We hold these truths to be self-evident, that all men are created equal’ — just words. ‘We have nothing to fear but fear itself’ — just words.”

Edwards’s 2004 stump speech: “I love the ads. Buy their medicine, take it, and the next day you and your spouse will be skipping through the fields.”

Obama: “You know those ads where people are running around the fields, you know, they’re smiling, you don’t know what the drug is for?”

Edwards (2003) : “I haven’t spent most of my life in politics, but I’ve spent enough time in Washington to know how much we need to change Washington.”

Edwards: “We need a president not afraid to use the word ‘union,’

Obama: “We need a president . . . who is not afraid to mention unions,”

Who Will Snoop Dogg Vote For?

Political activist / Media correspondent Snoop Dogg, oh wait, I mean Blunt Smoker/Rapper/#1 Pimp Snoop Dogg is torn up about who to vote for. Or at least thats the implication between CNN political ticker headline Snoop Dogg torn between Obama, Clinton. Now I have no problem with this article, I mean people are always curious what candidates celebrities support.  And with the rockstar like craze Obama has been using to help people look past his weak credentials and even weaker plans, it is refreshing to see a celebrity not just jump on the wagon.  Many celebrities with little to no political knowledge have jumped behind Obama helping to raise money and awareness.   Some how there is this implication if you don’t support Obama over Clinton you are some racist who hates change.

What I thought was funny is that the article is the top story on the CNN ticker, which is a blog I frequent several times a day.  If I were Snoop I would write a rap about the two candidates and switch between the verses who I was supporting.  Add in his characteristically smooth hooks and he now has new hit that every station will jump to play throughout the primary season.

Score One for Team Clinton

I read an editorial on the New York Times website endorsing Hillary Clinton for the Democratic nomination tonight. I am not going to rephrase or highlight it, because I believe you should read it for yourselves in its entirety (its not long). I feel it accurately captured my view on the election, and the differences between Clinton and Obama.

I like both of them politically and because of the great overlap in their platforms it can be hard to differentiate.   I would be happy with either in the White House, but one clearly has more experience and is at least vocalizing more specific, in depth plans for our country.  While they share similar goals for the country, I need a president with plans to achieve those goals.  Although Clinton’s plans have not always panned out, she has always been forward about her successes and failures and willing to keep moving to get things done.

CNN.com has an article by reporter Randi Kaye about the difficult choices facing African American female voters in South Carolina. The premise is who will black women vote for? Will they vote their race or their gender. Read the Article Here.

I think that is a degrading oversimplification about a group of people.  While I highly doubt Randi Kaye is a sexist (Randi is a women) or a racist (she has had wonderful coverage of Katrina and other potential race issues).  The article smacks of racism and sexism.  I expected to read the name of some 65 year old white man on the by line.

Black women are both black and female.  It is not trading on either to vote for the candidate of one’s choice.  The article does not acknowledge until 3/4 of the way through, and only then with one sentence, that black women are capable of voting on the issues.

The tone of the article just didn’t sit right with me.  It takes a serious topic (and a serious portion of the voters in South Carolina) and trivializes it into black and female stereotypes.

At Anjay’s Salon in Charleston, the only thing louder than the hair dryer is the chorus of political opinions.

Salons are a target for the campaigns — across the state they have turned into caucuses of sorts. They’re where women gather and gossip.

Why is it when women are gathered talking about politics a reporter has the nerve to call it gossip.

Race and gender are not the two separate halves that compose black women.  I think if a black women is torn between the two candidates over race or gender, it is about race and gender issues.  There is a difference between voting for Clinton, as a woman, because you believe she will more vehemently right for reproductive rights, and voting for her because she is a woman and you think it is neat to have female president.

It could just be me reading too much into the article.  But I think a few revisions, better selection of quotes, and a little more caution in using stereotypes and this could have been  an actual piece of journalism.

Oprah is taking over the world. Or at least having a large influence on it. With millions of viewers and an ever growing audience, Oprah is talking to whoever will listen. And many are listening. Hell I don’t even watch her show, but I listen to what books I should read. But this time she is endorsing more than a book or gadget. She is endorsing Barack Obama for president. Many believe it is about seeing a black president or jumping on the rockstar like following for Obama.

But I know the truth, it is just one stop on her way to world domination. It is important to have friends in powerful places. The President of the United States is a pretty powerful position. Some have said my theories on Oprah are a little far fetched. But I’ve always know she was a conquerer. From the news, to the talk show, to the made for tv movies, to book club, to the Broadway shows, to the magazine, to the South African school and now to endorsing a presidential candidate.

But now she has gone to far!! She is getting her own tv channel. The Oprah Winfrey Network, or OWN, will premier in 2009.  So you wonder why is this so terrible?  No one is forcing me to watch it.  The problem is the channel will be replacing Discovery Health Channel.  I love the Discovery Health Channel.  “Incredible Medical” is the most compelling show on television, I have been late to work in order to see the final diagnosis.  Plus shows like “Baby Baby”, “Adoption stories”, and “Babies: Special Delivery” are the only shows on television that can make me cry.

Video of The Day

Gotta love his moves.  He will be the smoothest dancing vice president hopefully.  (even with moves like that I have to support Clinton.  She has the experience, talent, and plan to be our next president.)