For the Bi Guys

NYC-based writer/director/actor Greg Scarnici’s rap exposes the bisexual lifestyle. He is a pretty funny guy and does some wicked Amy Winehouse, Britney, and Madonna spoofs. Check out his videos here.

I HATE Gus Van Sant. Let me get that out of the way first. Now sure he has been involved with many films I liked, such as Good Will Hunting. But My Private Idaho and Elephant are probably two of my least favorite movies of all time. Well he is directing the Harvey Milk biopic (wondering who is Harvey Milk?).  So I looked up the film because there is a lot of buzz about which celebrities are in it.  Currently Sean Penn, Emile Hirsch, and James Franco are attached/filming.  But that is not the point of this post.  It turns out there is a Gus Van Sant movie coming out soon.  Paranoid Park.  Heres the plot line: A teenage skateboarder’s life begins to fray after he is involved in the accidental death of a security guard.  I watched the trailer and I want to see it.

I’m All for Naked Girls, but.. 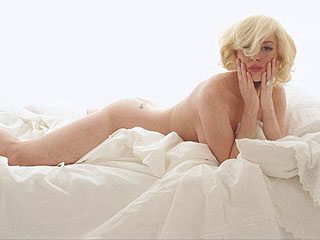 Have you all seen the new Lindsay Lohan photos?

In what is likely her greatest role to date, Lindsay Lohan plays Marilyn Monroe between the sheets – literally – in the new spring fashion issue of New York magazine.

Recreating Monroe’s legendary 1962 final photo shoot for Bert Stern with the veteran lensman himself, Lohan posed for the spread on Feb. 5 at the Hotel Bel-Air.

Here is a link to the photos. The photos are gross.  They are cheap, exploitative, and visually disturbing.  She is a drug addict slut and is likely to suffer a Marilyn Monroe fate.  So the accompanying articles references to Monroe (and Heath Ledger’s) untimely deaths make Lohan seem out of touch with reality (she talks about how that won’t happen to her).  The camera man, Stern, is famous for the originals and the sexy depth they showed.  These are cheap restagings that don’t deserve the media storm they are generating.  Additionally, couldn’t someone airbrush the 40,000 freckles off her body.

At least she isn’t rail thin anymore.  Now her extremely pale boobs are a reasonable size.

I have found a new guilty pleasure website. HotChicksWithDouchebags. The site has pictures (with commentary) of the dreaded, but common, club casualty: hot chicks with douchebags. Unbelieveably good looking women with swarmy, greasy men. Hair puffed up, shirt unbuttoned 30k millionaires, drunk frat guys throwing gang signs, and old men trying to score with young girls. Of particular interest is the Douchies, they give out awards for the douchiest of douches.

I recently read an article in the Wall Street Journal (and by recently I mean I recently found my January 31 edition). The point of the article was women with larger breasts have increase risk of adult diabetes (more properly Type II since it is increasing occurring in children and adolescents). That is an of itself is not shocking nor news, since the biggest predictor is obesity and with big bodies often come big boobs. What I found crazy is that the increased risk of diabetes occurs when the study controlled for waist size and BMI. Although, as far as I know, they did not take into consider past size or BMI.  Overweight and obese women may develop breasts earlier and to a greater extend due to increased estrogen levels, so larger breasts in some instances may correlate to a larger size person who has lost weight.

On a less serious note, let me explain the big women, big boobs phenomenon.  Fat women have large breasts, very skinny women have small breasts.  Now that doesn’t always hold, we all know lucky bitches who are skinny and have big boobs, and sadly we all know a couple unfortunate ladies who are big but small chested.  But in general we understand, boobs are made of fat, fat people have fat, and therefore there is going to be a relationship.  Now some may say this is merely the science of fat distribution, but I know the truth.  It is proof there is some sort of just force or God governing the world.  Most men are looking for a skinny woman, and that to them is more important than breast size.  But there is also a chunk of self proclaimed “breast men”.     The “breast men” will pursue larger women knowing there will be larger breasts.  This is the mate distribution system.   Otherwise only skinny women could ever find men.  By giving overweight women bigger breasts the playing field is leveled.

Loveline: The Big Break Up Edition

Being dumped can be terrible. Dumping someone can be terrible. While neither party is happy during the dumping, in the long run both may be happier. Well there is an awesome website “So You’ve Been Dumped”

It covers all the important bases of dumping, like what books to read or music to listen to. It has humor and advice. It has good break lines (some good in the true sense, but mostly good in the funny sense).  For example, the site suggests Billie Holiday’s –“Good Morning Heartache ” as a post break up song. I would like to share my suggestion, Ani Difranco’s “untouchable face”.  One of the books it suggests is Exorcising Your Ex – Elizabeth Kuster . My suggestion is It’s Called a Breakup Because It’s Broken – Greg and Amiira Behrendt.

“Dating you is killing who I am.”

“I have lost all romantic feelings for you completely, and I desire no future relationship with you.”

“She’s exactly like you used to be – before you became a bitch.”

“I think you love me more than I love you.”

“The longer we are together, the less serious I am about you.”

“Really, it’s not you, I’m just going through a selfish phase…”

1.  Tell your mutual friends what you are thinking, make them swear to secrecy, and then give it a little time, at least one of them will give him/her a heads up.  Maybe they will dump you first, or at least they won’t look like a deer in the headlights.

2.  DO NOT START DATING ANYONE ELSE until it is completely over, if you have already started dating someone else then LIE

4.  If you do it close to a holiday, you are a jerk and yes you still have to get a present.

5. His/Her friends, relatives, and coworkers are off limits for a time period equal to or greater than the duration of your relationship (exception-when your ex gets engaged/married)

I recently came across a new word, Sleeveface or Sleevefacing. My initially thought was a nasty sex term. I am sure some of my readers could come up with a good definition for sleevefacing. But to my surprise it is an up and coming pop/modern art form.

Sleeveface: Sleeveface is the art of “one or more persons obscuring or augmenting any part of the body or bodies with record sleeve(s) causing an illusion.” You’re basically posing with the record label as though it were a part of your own body.

Here is a whole album of sleevefacing pictures!! 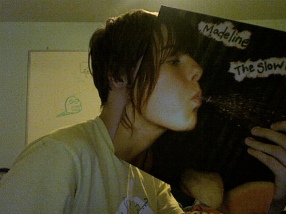 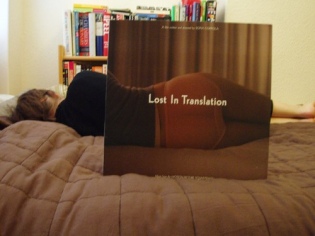 Pittsburgh: Gay Vacation Destination, Since When?

I wanted to share some excerpts from “The Out Traveler: Andy Warhol’s Pittsburg” by H. William Bain

From the spring 2008 issue of The Out Traveler.

“I am from nowhere,” Andy Warhol was known to say when asked where he grew up. With these four words, he often gave the impression of a strained relationship with his hometown of Pittsburgh, the working-class city that fostered his talents as a child and gave rise to many of the themes that recurred throughout his work and defined his career.  Today, Pittsburgh stands as a paradigm of urban renewal, shedding its reputation as the Smoky City and officially claiming the title of “America’s Most Livable City.” In fact, Pittsburgh is quickly becoming a haven for “gay nesting” among settled Eastern same-sex couples.

You’ll find Andy’s boyhood home (3252 Dawson St.) in Pittsburgh’s university section of Oakland. The humble brick house has been privately owned for many years, but plans are being made to restore the home to appear as it did during Warhol’s childhood and open it as private housing for art students. Throughout his childhood, Andy’s family attended Mass each week at St. John Chrysostom Byzantine Catholic Church (506 Saline St.; 412-421-0243).

Visitors to Pittsburgh will find a majestic theater nearby at the Benedum Center (719 Liberty Ave.; 412-456-6666), built in 1927 and restored to its original splendor as Warhol would have seen it.

It was while studying in the commercial art program at Carnegie Institute of Technology that Warhol first began to develop his ideas about the relationship between capitalism and art. Now called Carnegie Mellon University (5000 Forbes Ave.; 412-268-2000), this Pittsburgh institution is recognized as one of the world’s top arts and technology schools. Carnegie Mellon also borders on Shadyside, a mainly residential area where many gay couples now settle. While Pittsburgh lacks a true gay area, one can find several gay bars here, and it’s not uncommon to see shops flying the Pride flag.

Not far from Carnegie Mellon, you will find the Carnegie Museum of Art (4400 Forbes Ave.; 412-622-3131), which houses a number of Warhol’s works. Called the world’s first museum of modern art, it was envisioned as a showcase for the “Old Masters of tomorrow” by its founder, Andrew Carnegie, in 1895.

…the city is now ground zero for Warhol art, thanks to the Andy Warhol Museum (117 Sandusky St.; 412-237-8300), one of the most extensive museums dedicated to a single artist in the world. Opened in 1994, it houses more than 12,000 of his works, including homoerotic drawings, portraits of gay icons, and films that explore the connection between voyeurism and desire, like Blow Job and My Hustler, as well as important documents, records, and source material. Together with the Mattress Factory (500 Sampsonia Way; 412-231-3169), an avant-garde art museum exhibiting room-size installations, the Warhol plays an integral part in the contemporary art scene touted by Pittsburgh’s urbane gay set.

I thought I would quickly share something random I learned yesterday.

Researcher Alan Hirsch, MD found that the combined aromas of cucumber and Good & Plenty candy and the scent of baby powder tied for first place in a study that tested which scents aroused women the most. Hirsch wrote in his study, “My advice to men would be throw away the cologne and get some Good & Plenty”.

To make it more gay friendly, lets say “My advice to people who like women would be to gets some Good and Plenty”