I came across this jarring anti-meth ad and decided to post it.  Not that I think any of my readers are users, but a lot of us know people who do or have used meth in the past.  People tend to assume it is relatively safe, especially since there are prescription versions available.  But its not.   It is highly addictive and potentially deadly.  But I think the side of meth that is often down played is the aggressive behavior that sometimes accompanies it, that i why i like this commercial.

What do you think?

I heart the Priceness of Genovia

For the Bi Guys

NYC-based writer/director/actor Greg Scarnici’s rap exposes the bisexual lifestyle. He is a pretty funny guy and does some wicked Amy Winehouse, Britney, and Madonna spoofs. Check out his videos here.

“Ain’t No Other Weatherman”

For anyone who finds Christina Aguilera as difficult to understand as me.  I found this when I googled lyrics for a song I heard on the radio today.  It’s funny/cute.

Video interpretation of Christina Aguilera’s “Ain’t No Other Man”

As many of you know, I got the Planet Earth series for Valentine’s Day because it is awesome.  This video is making the rounds on the internet right now.  It is an immature, profanity laced spoof of scenes from the breath taking documentary.  I warn you not to click unless you are feeling distinctly like a 12 year old boy.  I thought it was cute/funny, but that could just be because I feel a little punchy after a long day.

I never thought I would say this, but there is a Tyler Perry movie I am looking forward to.  “Meet the Browns” looks like solid family movie, and Angela Bassett is always an amazing actress. 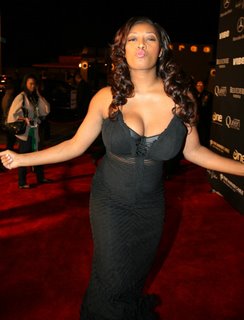 Today is Fat Tuesday and Super Tuesday, so it is officially Super Fat Tuesday.  Its where you must be super nice to fat people.  Tell a sexy big lady in your life, just how sexy they are.  I suggest celebrating the holiday listening to  Juvenile – Mama Got Ass (She Get It From Her Mama) while eating ice cream.

SCANNED
Create a free website or blog at WordPress.com.