I had my wisdom teeth out today.  Its yet to be seen if it was a wise choice.  Currently it hurts like bitch and it super gross.  But who know what the future would have held.  While reading up on the medicines I was prescribed WIKI had this to say:

Preventive removal of the third molars is a common practice in developed countries despite the lack of scientific data to support this practice. In 2006, the Cochrane Collaboration published a systematic review of randomized controlled trials in order to evaluate the effect of preventative removal of asymptomatic wisdom teeth.[6] The authors found no evidence to either support or refute this practice. There was reliable evidence showing that preventative removal did not reduce or prevent late incisor crowding. The authors of the review suggested that the number of surgical procedures could be reduced by 60% or more.

Likewise, ClinicalEvidence published a summary,[7] largely based on the Cochrane review, that concluded prophylactic extraction is “likely to be ineffective or harmful.” The website offered the following details:

Charlie Sheen and Denise Richards are fighting some more, this time their girls are caught in the cross fire.  While media whoring Richards is usually just as wrong as the womanizing junkie Sheen, in this situation I side with her.  Like a small but growing group of uninformed, reckless parents Sheen doesn’t want his children vaccinated.

I have news for you Charlie: vaccinations are safe and effective.  negative reactions are rare.  autism has not been linked to vaccines.  the biggest vaccine problems occur from improper supervision afterwards (parents need to monitor for a fever) or allergic reactions.  but more important than all the science in the world, since some parents will believe whatever they want anyway: vaccination is not just about your kids, it makes all kids safer to be in an immunized community.

And so the tool bag of the day award goes to Charlie Sheen.

The FDA has moved to have Ethicon the maker of Regranex put a “black box” warning on the label.  The “black box” is the highest FDA warning level.  Regranex gel is used to treat dangerous foot and leg ulcers in diabetics.  Regranex is a medicine that is a genetically engineered form of a human growth factor that helps wounds heal faster. It is a huge benefit to diabetic patients with slow-healing wounds on their legs or feet that often result in amputation of the affected limb.

But its effect on human growth factor may make cancer cells grow quicker too. Post marketing studies showed patients may have a fivefold higher risk of dying from cancer.

“In announcing this label change, FDA still cautions health care professionals to carefully weigh the risks and benefits of treating patients with Regranex,” Susan Walker, MD, director of the FDA’s Division of Dermatological and Dental Products, says in a news release. “Regranex is not recommended for patients with known malignancies.” 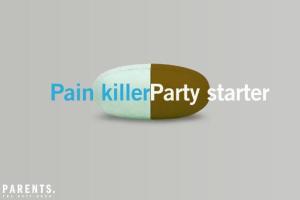 I saw this ad on the nytimes website tonight and figured I would share it.  While the effectiveness of ad campaigns aimed at ending teenage abuse of prescription drugs remains to be seen, I felt the ad was poignant.  It can be hard for parents to imagine their kids doing drugs at all, let alone stealing drugs from them.  But that is exactly what is happening.  These aren’t just your “bad kids” these are often the honor roll student or the star athlete.